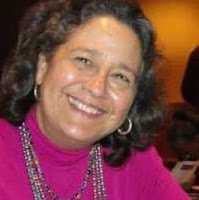 When my web team and I honored what we first called Día Champions in March 2009, we wanted to recognize a woman who embraced spreading the Día concept throughout her state. Flo Trujillo is still cheerfully busy with that work in New Mexico. Today we honor Día’s madrina, godmother in Spanish, a person traditionally chosen because of her commitment to the well-being of a child. In 1996, minutes after I was first zapped by the Día idea, the Tucson Reforma Chapter quickly volunteered to help. Soon after, my friend and literacy advocacy colleague, the respected Oralia Garza de Córtes, committed to connecting the Día concept to Reforma nationally. Reforma, of course, became the first organization to partner with me in growing Día. Gracias, gracias, Oralia, for your commitment to Día nationally and internationally.

I. Tell us about your path to librarianship and work in youth services.
“…[I]t was not until I became a mom that I fell in love with the fairy tales and the picture books that I read to my children when they were very young. … [A]t the newly reconstructed Carnegie Branch in Houston, [I met] Louise Yarain Zwick [who] had just returned to the states after spending some time in El Salvador. She was the one librarian who influenced me, mentored me and passed on her love of children’s literature and children’s librarianship. She truly understood how important it was for children to have a librarian who looked liked them and who understood their culture and spoke their language. She also imparted her vast knowledge of the classics of Spanish children’s literature. …It was Louise who encouraged me go to library school … My first job as a professional was as a children’s librarian at the Terrazas Branch of the Austin Public Library, actively promoting Spanish and bilingual storytimes, programs and services for the neighborhood children and their families.”

2. How long have you been a member of REFORMA, and why did you become a member?
“I joined REFORMA over twenty years ago, at the same time that I joined the ALA, ALSC, and EMIERT. I was a graduate student attending my first library conference. Louise had organized a program on Spanish Children’s Literature through EMIERT and invited me to participate. It was there that I met Sandra Ríos Balderrama … We became fast friends and true collaborators, working on REFORMA’s behalf to establish the children’s section of REFORMA.”

3. What ideas do you have for Día 2011 and what are your hopes for the 15th Anniversary celebration?
“2010 has been a banner year for promoting Día at the international level. … We hope to continue building Día at both the international and national levels. … As an organization we [REFORMA] will be enthusiastically promoting Día and the Pura Belpre Awards’ fifteenth anniversaries by encouraging Quinceañera celebrations throughout the community. At ALA annual in 2011, REFORMA and ALSC will debut Día and the Belpre’s Quince (fifteenth) birthday celebrations in New Orleans.”

4. What are you reading now?
“I just finished reading Mr. Mendoza’s Paintbrush, a graphic novel by Alberto Urrea (Cinco Puntos, 2011). The illustrations are stunning, and the story is brilliant. It has stayed with me still. I’m also reading Urrea’s Into the Beautiful North. I am thoroughly enjoying Grace Lin’s Where the Mountain Meets the Moon (Little, Brown Books for Young Readers, 2009), a wonderful magical fairytale in novel form.”

5. What is your favorite example of Bookjoy either as a child or an adult?
“Years, back, I found my eight year old son quietly searching through the hall closet. I asked if I could help, but he was deep in thought. As I observed him, I realized that he was looking for a magic path much like the children he was reading about in the C.S. Lewis’ Chronicles of Narnia series The Lion, the Witch and the Wardrobe.(1950).That was a ‘bookjoy’ moment I will long cherish.”

This is an edited version of the full interview which you’ll find on the Día Dynamos page of Pat’s website, https://www.patmora.com/dia-dynamos/