↓
Home→Día→A View of Dia: Past, Present and Future

We asked Oralia Garza de Cortés to write about her role in Dia’s history, her work with Día California, and her dreams for Dia’s future.

It was the mid nineties, Bill Clinton was our President, and the Spanish sociologist and prolific author and scholar Manuel Castells had just authored the first of his three volume Information Age: Economy, Society and Culture (1996), coining the term ‘fourth world’ to refer to pockets of communities in first world countries, places like the barrios and ghettos that look similar to third world communities with young people suffering from a lack of equitable education, bleak job prospects and limited opportunities, the devastating effects of urban poverty and globalization. Midnight basketball was considered a panacea for solving the problems of disengaged youth. With limited staff and budgets (sounds familiar?) library outreach services were difficult to accomplish.

So when Pat Mora called to mull over the “What if?” question: “What if we took a traditional children’s day in Mexico, El día de los niños, and added the concepts of books, culture and language to the mix to create a day to celebrate children and literacy? It was a brilliant idea and a win-win for everyone involved: for the children and their families, the libraries and the librarians trying desperately to bring Latino families into the library fold. It was a recipe for success!

Just a few years earlier, then fellow children’s librarian Sandra Rios Balderrama and I had created the Children and Young Adult Services Committee of REFORMA, the National Association to Promote Library and Information Services to Latinos and the Spanish speaking, an affiliate of the American Library Association. Having the public space and the mechanism set up to work with this amazing professional organization of librarians was wonderful because we were able to take Día before the REFORMA Board and make this project an important part of our work in promoting library services for Latino children and families. The support for Día from REFORMA librarians was phenomenal. Some, like the Tucson chapter of REFORMA embraced Día from day one, implementing a Día program in a library located in Tucson‘s barrio and, more importantly. reaching out to Latino children and families. Día worked because it was a simple idea developed from the bottom up. It was flexible, and could be shaped and implemented in any way shape or form. It fit community needs and it built on the strength and abilities of the librarians and the communities they were working with. More importantly, Día worked because the community saw that libraries were speaking their language, inviting them in and honoring and respecting their culture and their traditions. What a concept!

The amazing thing about Día is the wonderful support it received from all corners of the library world. In Texas, Día worked because library visionaries like Pat Smith from the Texas Library Association and Jeanette Larson, then working with the Texas State Library, found ways to incorporate Día into their structures and developed ways to implement it at the local level. In California, Día was built from the bottom up by the likes of library administrators like Mark Smith who oversees the Riverside County Public Library. Smith observed Día’s development from his Texas library leadership days and believed in the power of Día to make a difference in community support for libraries. With his steady and persistent influence, Smith wrote the original grants that made Día possible through LSTA funding. He was instrumental in convincing then California State Librarian Susanne Flint to implement Día statewide. Flint brought in library consultant Cindy Mediavilla from the California State Library, who in turn sought the services of Rosario Garza as Director of the Southern California Library System, the administrative body for the Día project known as Día California, a statewide initiative that works with libraries to promote literacy through Día. This year alone, over fifty-five libraries from across California applied for awards to support Día programs by providing library programs in support of literacy. The program offers eligible libraries with a small award to bring a children’s author or other literary program to the library. The program also offers free bilingual books for distribution during the Día program. Día California is an excellent example of what state libraries can do to promote and implement literacy and library programming for Latino children and families, particularly if they utilize Día as a way to promote family literacy. 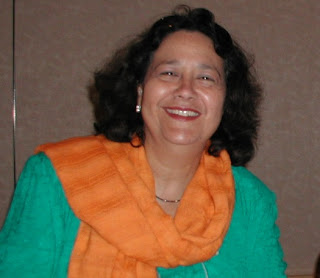 If we look at the original intent for Children’s Day, established in the 1920’s by the World Conference for the Wellbeing of Children held in Geneva, Switzerland, we can see that the concern for the well-being of children was what led to establishing Children’s Day in the first place. What if librarians convened the children’s advocacy networks in their communities and looked at the needs of Latino children and all children for that matter, and resolved that they would work on those issues that affect children’s learning, children’s literacy, and the overall well being of children? What if we resolved to provide education programs and services for families, working with the many agencies and organizations, teaching parents to advocate for their children’s needs, be it in the area of bilingual and first language story times or health and education and equity advocacy in public schools? Radical ideas that require radical action? Hardly! It’s called participatory democracy. It’s what ordinary middle class parents utilize to get the services they need for their children and their communities. And it works. Why can’t we make this also work for low income and the new Americans? The future of America’s children and of this country lies in this balance.
Many thanks to our guest blogger, Oralia Garza de Cortés. She is a leading voice for bilingual and multicultural children’s literature and an ardent advocate of equity in library services for Latino children and families. A Past President of REFORMA, the National Association to Promote Library and Information Services to Latinos and the Spanish Speaking, an ALA affiliate, Garza de Cortés co-founded the Pura Belpré Award and the Children and Young Adult Services Committee (CYASC) of REFORMA, She has lead REFORMA and the library community in implementing El Día de los Niños/El Día de los libros.