Welcome to Bookjoy Creativity Salon, Diana! It was such a pleasure to meet and hear you at AWP (Association of Writers & Writing Programs) in Chicago last March. Your words about me at our panel were incredibly generous. I treasure them. Among other talents, you are a poet, a professor, and a committed advocate. 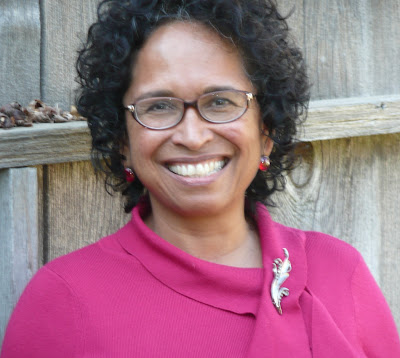 Diana, please tell us a bit about yourself.

“The biggest influences on me probably are being born to parents who worked in the fields and who were living in a labor camp when I was born. The camp and the people who lived and worked in the camp served as my earliest role models for what it is to live an honorable, hard-working life. At the end of your life, all you have is your reputation as a hard worker and the respect of those you worked with. Then, the San Joaquin Valley engraved its dry flatness on my consciousness. From an early age, I understood the importance of rain, the lack of rain when needed, the overabundance of rain at the wrong time. I reflect often on water and its many and various aspects. Finally, becoming a single mother when I was 20, struggling with the powerlessness of having to rely on welfare to make ends meet, filled me with a rage that’s never completely left me. I discovered the tone deafness of those who have always known a privileged existence. It also makes me deeply grateful for all that I now have: a patient, generous husband and partner; parents, son and grandsons who make me proud to be part of the clan; and a university where I can teach what I’ve learned about writing and about living.”

Let me begin by asking about your work as a poet. You wrote the collection, When Living Was a Labor Camp, published in 2000. Such a moving title. Can you tell us about the impetus for that collection? 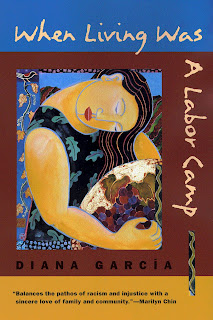 I wrote When Living Was a Labor Camp out of a deep commitment to the generations of farm workers whose sacrifices weren’t represented adequately in the poetry I read in the 1990s. In my own family, one uncle was poisoned and died after picking tomatoes in a field that had been sprayed with pesticides. Another uncle, a former bracero whose permit had expired, was picked up during Operation Wetback in the 50s and 60s and returned to Mexico. In both cases, the men left behind women who struggled to raise children on their own. I also wanted to capture the perseverance of the generations that followed, the children and grandchildren whose lives were impacted by prejudice. Finally, I wanted to write a book that my parents and my aunts and uncles could read, hear and understand and know their lives, and those of their children, were being honored.

In what ways does creativity shape your work and your life?
I have always trusted my response to the natural world, that sense of self that is best reflected by moments in nature. Similarly, when I write, I feel a sense of connectedness to the world around me, to the expressions and experiences reverberating in the world. Writing also is like intellectual weight lifting for me. Much as a sturdy weight lifting workout leaves me drained and tranquil, a good bout of writing leaves my brain strangely emptied and refreshed.

I know you teach an upper division course, Social Action Writing. How did that course evolve and can you tell us a bit about it?
California State University Monterey Bay, established in 1994, is the first university in the CSU system to require 30 hours of service learning at each of the lower and upper division levels. Within our interdisciplinary humanities and communication major, two such courses, “Social Action Writing” and “Creative Writing and Service Learning” (originally titled “Creative Writing for Teachers”), were developed as part of our creative writing and social action program. The focus is on learning as much as it is on service. We value the commitment our neighboring communities—Seaside, Salinas, Marina, Monterey and Pacific Grove—made to converting the former Ft. Ord to a university. Not just communities, but the neighboring counties of San Benito and Santa Cruz were also involved. We want our students to learn from this level of civic engagement, this commitment to the issues affecting our neighbors and colleagues. In “Creative Writing and Service Learning,” students focus on using creative writing to engage children’s creativity and imagination in after school and community school programs. In “Social Action Writing,” depending on the theme that semester, students might work with community partners examining substandard housing, pesticide poisoning, educational inequality, or the peace movement. Our partnerships are on-going and a vital part of our students’ education.

In a political introduction recently, Obama was described as “burning on the inside” referring to his passion for a just nation. Though I was only with you briefly, my sense is that Diana Garcia also burns on the inside. Am I right?
Injustices of any kind anger me, especially since in most cases, injustice is leveled by those with power against those who are voiceless and powerless.

What were you like as a child and what advice would you have given to that young, beautiful self?
As a child, I was a bookworm, reclusive, and living in a world of my imagination. I imagined a world of books, of teaching, of travel. I never would have imagined that all my dreams would come true, and then some!