↓
Home→Uncategorized→What Does History Teach Us?

Some months back, while skimming a magazine on a treadmill, I read an article, “The Art of Gaman” and learned that gaman in Japanese refers to “bearing the seemingly unbearable with patience and dignity.” The article was about a traveling exhibit (that also became a book), and I noticed that the exhibit was coming here, to Santa Fe. I saw the exhibit, and though I had read a number of articles about it, the experience was heart-breaking.

Facts seldom cause us to fully feel sorrow. The facts, that FDR issued Executive Order 9066 on February 19, 1942, that people of Japanese descent were now officially labeled our enemies, don’t force us to ask: how did it feel to lose your rights, to be separated from your family, to live in “barracks” that were actually shacks, to be isolated, prisoners. How did families who were together strive to create a home in stark conditions? How did men in all-male camps such as one in Santa Fe draw on their emotional reserves and not only create a community, but in the various camps, create art. They taught themselves and one another to be inordinately resourceful making rings from peach pits, making beautiful wooden bird pins inspired by an article in National Geographic. The group in Santa Fe painted and wrote poetry.

And today, seventy years later, what have we learned about how we treat those who don’t look like us or who may speak another language or languages? Fear breeds hatred and heartache. How do we teach our young to learn from the past?

Watch the video “The Art of Gaman” by Smithsonian Magazine. 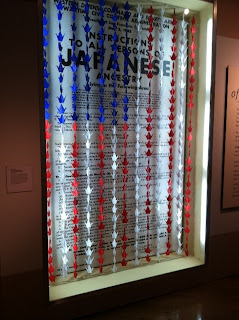 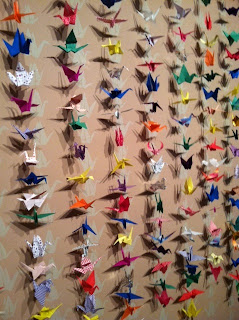