Exciting Reminder: April 2011 is Día’s 15th Anniversary! Some of you have been members of what I think of as the National Día Community from the beginning and some of you are deciding to join us now in linking all children to books, languages and cultures. As part of the celebration, by April 1, I’m going to honor 15 Día Dynamos, adding one a month. How special to add Rose Treviño. 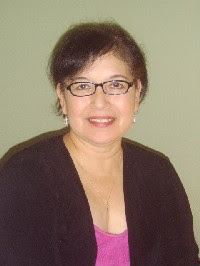 At the end of April, my friend Rose died. I’d met her years ago thanks to our mutual friend Oralia Garza de Cortés and thanks to ALA. Rose was an early supporter of Día and served on its National Advisory Committee at ALSC. A Texas librarian deeply committed to all children including the under-served, Rose promoted Día when she was head of children’s services at the San Antonio Public Library where she discovered bookjoy as a child, and later championed Día at the Houston Public Library. I believe it was Rose, who when she was on the ALSC Board, was a grand champion who encouraged the Board to offer to be Día’s national home.

Rose will be remembered by many for a host of reasons: because she was an exemplary librarian and the first Latina to chair the Newbery Award Committee, for her books: Read Me a Rhyme in Spanish and English (2009) and The Pura Belpré Awards: Celebrating Latino Authors and Illustrators (2006), and for the gracious way she treated all who knew her. I miss my friend Rose with whom I could always talk deeply about Día’s purpose and importance. From personal experience, Rose knew how hard it is to be a literacy advocate for families not viewed by all as important. She always cheered me up and assured me that better days were ahead, that Día mattered and would grow and grow.

As we begin planning for Día’s 15th Anniversary April 2011, I carry Rose’s memory and hope with me. She is Día’s angelita, inspiring us to be brave and creative in linking all children to books. Join us.