Broward County Commission Libraries Division Celebrates Día with Children’s BookFest on April 24th
BROWARD COUNTY, FL – Broward County Library’s Children’s Bookfest is slated for Saturday, April 24, 2010, at North Regional/BC Library, 1100 Coconut Creek Blvd., Coconut Creek, from 10:30 a.m. to 4:30 p.m. This free festival, which celebrates children and their books, is geared for youngsters ages 3 to ten and their families.
Children’s BookFest is held in recognition of Día de los niños/Día de los libros (Children’s Day/Book Day), a national cross-cultural celebration of children and reading (April 30).The theme for this year’s Children’s BookFest is: “One World, Many Stories: The oceans link us together.” In that spirit, the festival promises all little pirates and mermaids an ocean of stories and fun, and invites them to come in costume to the event (as pirate, mermaid or other sea creature), and join the BookFest parade.
BookFest will feature professional storytellers, top-notch children’s entertainers, authors,
strolling storybook characters, hands-on crafts and free books to the first 700 children at the event. We will be also giving out 200 books in Spanish, courtesy of Hoopoe Books and All Bilingual Press.
Featured presenters include:

David Novak – Storyteller David Novak combines the simple magic of theatre with the
evocative movements and voices of the master storyteller. Novak invites kids to “Get Wet Inside the Ears” with his presentation Sea Changes: Stories of transformation and magic from sea and shore. David Novak is a gifted teller who has been nationally acclaimed for his work. He currently resides in Asheville, NC.

Magician Cesar Domico – This Tampa Bay-area magician, a native of Colombia, has performed at cities and events throughout the United States and South America. Once called “the best magician in Colombia,” his bilingual comedy/magic show will delight and thrill kids and parents alike.

Tales and Trails Storytellers –This renowned storytelling couple from New Mexico – Bob Kanegis and Liz Mangual – say that their stories are for “everyone older than yesterday
and younger than tomorrow.” They’ll entertain with stories from around the world, including some bilingual tales.

Others – Adding to the BookFest entertainment lineup will be: Salty Sue the Pirate (aka
Suzy Hammer); Geddy the Gecko’s new Walking on Water show, and others.

Children’s BookFest is funded by the Broward Public Library Foundation with support
from Broward Family Life Magazine and the Florida Marlins Community Foundation.
# # # 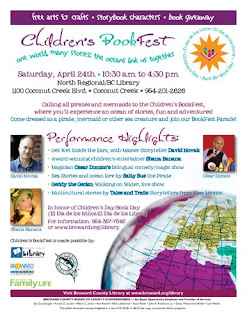 Thanks to our guest blogger Freda Mosquera, a youth services librarian with the Broward County Library.