El día de los muertos (Day of the Dead) is celebrated on Nov. 2. This Mexican custom of building altars to remember the dead has become a popular celebration at museums in the United States. It’s difficult to fully express my thanks to librarian Sandra Rosales who with staff from Lark Branch Library in McAllen, Texas, created an altar in honor of my parents Estela and Raúl Mora also known in El Paso as Stella and Roy. This altar at the Museum of South Texas in Edinburg displayed their favorite foods including pan dulce (yum!), Mexican sweet bread which we all loved/love. Gracias, gracias, Sandra.

Why did you decide to construct this altar in honor of my parents?
SR: I am the head of the children’s department at the Lark Branch Library in McAllen, Texas and I had just finished recommending your books to a teacher so you came to mind. You are obviously very much alive but I remembered attending a workshop where you spoke so lovingly of your parents. I never thought I would be able contact you much less have you approve the altar for your parents. It was a fantastic day for me and my staff when you so graciously approved. We began to make plans immediately.

Have you constructed such an altar before?
SR: This was the second time that we participated in the Museum of South Texas History’s annual Día de Los Muertos celebration. Last year, we constructed an altar for Roald Dahl. You can’t get anymore non-Hispanic than Roald Dahl but we had fun with it.

Why is constructing these altars an important tradition?
SR: Living in the Rio Grande Valley which is on the Texas Mexico border, I had always known of Día de Los Muertos. However, neither I or my staff had ever participated in the holiday. We learned so much of the traditions associated with altars such as it must contain 3 levels, a bowl of water and wash cloth need to be placed so the dead can clean up after their dusty travel and candles to light their way. I remember going home and asking my mother about my grandparents and sharing memories with my brothers and sisters. 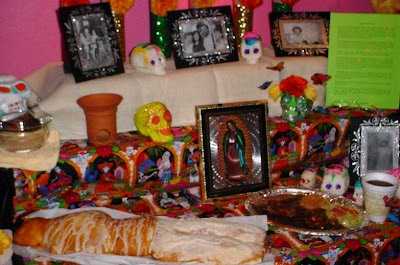 What were some of the topics for the other altars in the exhibit?
SR: There were altars for novelists Octavio Paz and Frida Kahlo. I particularly enjoyed the altars done by family members. One celebrated a young man whose family donated his organs. The family placed organ donor cards on his altar. I saw an elderly widow and her granddaughters standing by the altar in honor of her husband.

What were the challenges of constructing this remembrance?
SR: We had to work hard in order to personalize it. My staff constructed a flower corona with a picture of your parents placed in the middle. We printed up pictures of your family since we knew that your parents would like to be surrounded by family. Once you told us your parents favorite foods, then we made sure that your parents would enjoy their meal on their celestial visit. One of my staff members designed two mini-calaveras representing your parents. She placed a multi colored tutu on your mom’s calavera in honor of the rainbow tulip. Your father’s calavera wore eyeglasses and a suit and tie.

It is our greatest hope that you and your family believe that we have brought honor to your parents. 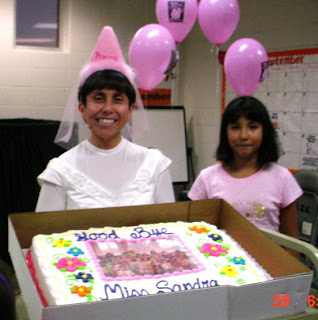 Here’s a photo of Sandra at a recent goodbye party as she moved from a branch to the main library at McAllen. ” For my going away party, I told the children that, the whole time, Miss Sandra was really a princess. As a princess, I wore my gown and tiara. It was so cute, I sat in my plastic lawn chair throne and my story time children came up to me with flowers and presents. It was a lovely send off.”