How grateful I am to my friend Texas librarian Jeanette Larson who has been an active Día supporter from the beginning. The key word in that first sentence is “active.” Jeanette is a do-er. Long before I was that familiar with the Web, it was Jeanette who said, “We need to get Día on the Web, and we need a Día booklet.” What a gift to me and Día. As you’ll see in her answers, through the years, Jeanette has been helping Día grow, and now she has completed an ALA book, El día de los ninos/El día de los libros: Building a Culture of Literacy in Your Community Through Día. Gracias, Jeanette. (And don’t you love her Halloween answer below?)

1. When and how did you become interested in sharing bookjoy?
JL: My parents both were big readers and they shared bookjoy with all of us. I remember being about 6 or 7 years old and teaching my younger siblings to read. As I recall, or have been told, I did that primarily by sharing books and reading to them. We always received books as gifts.

2. How did you first learn about Día and what has been your experience with Día? 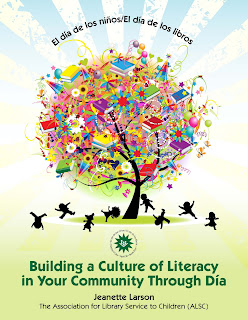 JL: It was very early in Pat’s planning and promotion. I don’t even remember how or where I met Pat but I was working at the Texas State Library when she was starting Día. Part of my work included helping libraries plan programs and services. Pat mentioned Día and her desire to encourage libraries to participate. We had just finished creating a resource guide for Read to Your Bunny, an early literacy project started by author/illustrator Rosemary Wells and I suggested to Pat that we create a similar manual for Día to help libraries get started. We gave that manual, which is still available at http://www.tsl.state.tx.us/ld/projects/ninos/, to hundreds of libraries in Texas and also made it available to libraries in Florida and any other libraries that wanted it. I also worked with Austin Public Library on several of their celebrations and served on the Texas Library Association’s committee to create the Día Toolkit. Even as a professor for Texas Woman’s University I include Día in my classes and encourage students to create sample programs for libraries. My latest Día project is a book for ALA/ALSC that will be published in April 2011.

3.What are your hopes for Día 2011, Día’s 15th Anniversary?
JL: I really hope that like a Quinceañera, the 15th anniversary marks a “coming of age” for Día. It has flourished and has many friends and supporters but it can now mature and reach its full potential. I’d like to see more libraries, especially school libraries, celebrating bilingual literacy and my hope is that more languages can be encompassed in that celebration.

4. What helpful tip(s) do you have for those organizing a Día event for the first time?
JL: Start small and grow. Don’t be afraid to ask for support and assistance. People are very willing to help. Read El dia de los ninos/El dia de los libros: Building a Culture of Literacy in Your Community through Día (ALA, 2011) as it provides tons of information on organizing and expanding Día events.

5.What is your favorite example of Bookjoy as either a child or an adult?
JL: At Halloween I give out books along with the candy. It’s wonderful to see the delight in a child’s face when he or she gets to pick a book. Sometimes the kids are not even interested in the candy; they know that the book is the real treat!

6. What are you reading now?
JL: I am on a non-fiction award committee so I’m reading a lot for that. I usually read a least two books and listen to an audiobook at the same time so there are really too many titles to list. I just finished Border Crossing by Jessica Lee Anderson and The Cupcake Queen by Heather Hepler. I love mysteries so am reading Hit List: The Best of Latino Mystery edited by Sarah Cortez and Liz Martínez. For my book discussion group I’m reading The Birthing House by Christopher Ransom. Another type of bookjoy is the joy of discovering a book I might not have read without some encouragement.

Beginning Tuesday, November 2, the Association for Library Service to Children (ALSC) is pleased to accept applications for mini-grants intended to expand youth literacy programs to include and celebrate a variety of cultures in public libraries. Up to 15 mini-grants will be awarded: up to eight at $4,000 each; and up to seven at $6,000 each.

Intended as an expansion of El día de los niños/El día de los libros (Día), the mini-grants will be awarded to libraries that demonstrate a need to better address the diverse backgrounds within their communities.

The mini-grants are part of the Everyone Reads @ your library grant awarded to ALSC from the Dollar General Literacy Foundation.The deadline for receipt of applications is November 29, 2010.