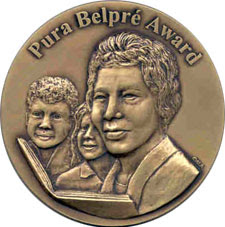 On January 18, many significant awards for the top books, audiobooks and video for children and teens were announced at the American Library Association’s Midwinter meeting. Included in the announcements were the Pura Belpré Awards honoring Latino writers and illustrators whose children’s books best portray, affirm and celebrate the Latino cultural experience. Pat is “simply thrilled” for both Rafael López and John Parra, Belpré winners for their illustrations of two of her picture books. López won the Illustrator Award for Book Fiesta: Celebrate Children’s Day/Book Day; Celebremos El día de los niños/El día de los libros and Parra won an Illustrator Honor for Gracias/ Thanks.

The Pura Belpré Award is co-sponsored by the Association for Library Service to Children (ALSC), a division of the American Library Association (ALA), and the National Association to Promote Library and Information Services to Latinos and the Spanish-Speaking (REFORMA), an ALA affiliate. Between 1996 and 2008 the award was given every other year and is now given annually.

You can read interviews with Rafael López and John Parra about their work on these books in Pat’s newsletter archives.
Rafael López interview
John Parra interview

Book Fiesta and Gracias/Thanks also were recognized as ALA Children’s Notable Books! 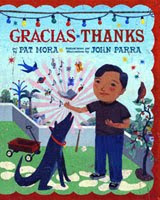 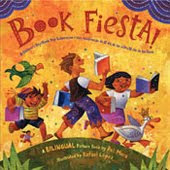